natural products. From northeast of India. 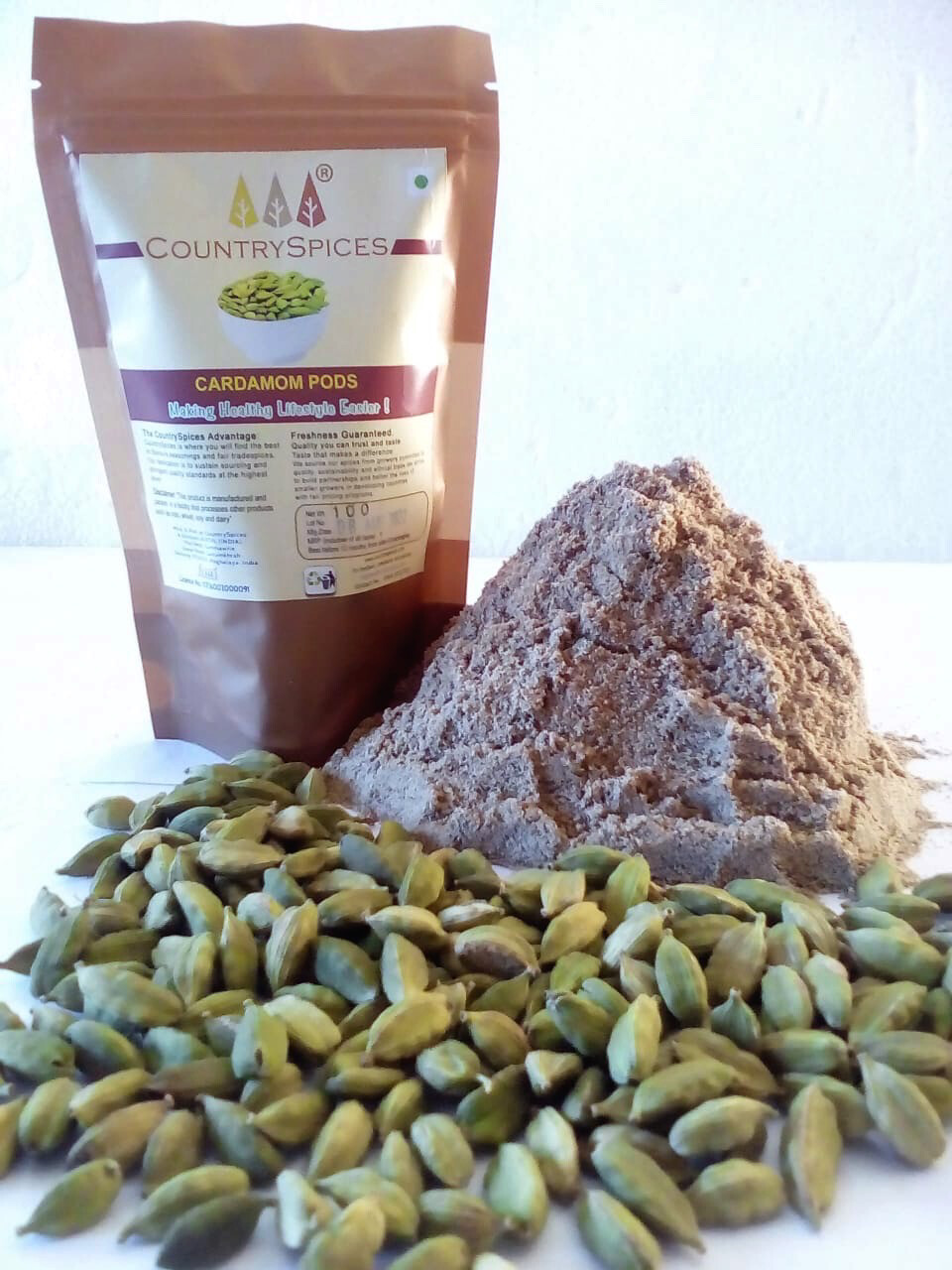 Cardamom, also known as Elaichi in India, is one of the oldest spices in the world, besides being the third most expensive spice after saffron and vanilla. Cardamom is grown extensively in South India. The spice is high in the phytochemical cineole, which positively affects many ailments and conditions. Cardamom pods can be green or black/brown. Green cardamom is considered to be the best. It is used as a spice, as a tea, and as a medicine. 100g of cardamom contains energy (300 kcal), carbohydrates (68 g), protein (11 g), dietary fiber (28 g), and no cholesterol (0mg). Cardamom is rich in various vitamins and micronutrients as well. These include niacin, pyridoxine, riboflavin, thiamine, vitamin A, vitamin C, sodium, potassium, calcium, copper, iron, manganese, magnesium, phosphorous, and zinc.

Cancer, particularly colorectal cancer, is one of the leading causes of death around the world. The rising cost of conventional cancer therapy and the subsequent side effects have encouraged researchers to look for alternatives that are sustainable. Studies have shown that dietary cardamom had a positive result in counteracting colorectal cancer to an extent of 48%.

Cardamom administration for cardiovascular conditions resulted in a lower heartbeat or controlled rhythm, and control of hypertension. The micronutrients found in it can counteract the surge of lipids in the body. The antioxidant enzymes had an influence on the cholesterol levels and helped in significantly controlling them.

Cardamom is also believed to possess anti-depressant properties. Its essential oil is one of the major oils used in aromatherapy. It can be used not only for depression but also as a cure for various other diseases ranging from stomach disorders to pulmonary diseases.

The methanolic extract from cardamom is the component that helps in controlling gastrointestinal disorders such as acidity, flatulence, and stomach cramps.

For many millennia, cardamom was thought to possess infection-fighting properties. It is observed that the oils from cardamom were able to inhibit the growth and spread of some of the very dangerous microbes that regularly cause food poisoning.

Cardamom is good for muscle and joint pain. Muscle spasms are often reported by older people. A sudden contraction of the muscles causes these spasms. When the muscles contract, they can result in a sudden emergence of pain. Cardamom possesses anti-inflammatory and anti-carcinogenic properties.

Cardamom has been used in Ayurveda, as well as traditional Chinese medicine for dealing with dental problems for many centuries. After the invention of antibiotics, it was found that these antibiotics produced mixed results, as well as side effects. Some side effects included the inhibition of friendly probiotic bacteria thriving in the intestines. However, the use of spices, on the other hand, is ideal because they inhibit only infectious microbes, not the probiotic bacteria.

Cardamom can also be used as a remedy for asthma and other respiratory issues. The crude extracts from cardamom were effective enough in opening up constricted windpipes . They were also effective in causing relaxation to the tracheal tissues.

The metabolic processes in our body release toxins and free radicals that have to be nullified and flushed out to remain healthy. Otherwise, these accumulated toxins can cause several diseases, including cancer and premature aging. Cardamom is known to act as a detoxifying agent. The essential oils and biochemicals present in cardamom provide detoxifying effects.

Traditionally, cardamom has been used as a remedy for nausea. Cardamom is an effective tonic and stimulant and is good for calming the sensations of nausea and vomiting. For sore throats, cardamom acts as a good remedy. CountrySpices Cardamom pods and CountrySpices Cinnamon sticks can both be boiled in water and can be used to gargle every morning to control painful sore throats.

Other Uses And Benefits

In Ayurveda, cardamom has been used as a remedy for urinary tract diseases and infections such as cystitis, nephritis, and gonorrhea.

Hiccups can be very annoying, especially for children. There are several remedies prescribed in folk medicine and one of the most popular among them is startling a person who is hiccupping. This may or may not work most of the time. However, cardamom is another very effective remedy. Take few pods of cardamom and boil them in water. By drinking this water, one can get rid of hiccups.

Cardamom pods and seeds can be chewed as a breath freshener. The flavors and aroma found in cardamom are due to the presence of essential oil. It is no wonder that the essential oil of cardamom is being used as a popular ingredient in chewing gum!

Save this product for later
Display prices in: INR